Toyota Vios 2013 Priced, to Launch in the Philippines in July

If you’re looking for a car to buy and your budget is quite limited, you might want to check out the new Toyota Vios 2013.  The new Vios will be officially launched in thePhilippines in July but you’ll be able to see the actual stuff in June in Toyota dealerships nationwide.  We all know that the Toyota Vios is a budget car, at least compared to the compact sedans like the Toyota Corolla and Honda Civic.  The Vios is about the same price as the other sub-compact sedan from Honda, the City.

The design of the Toyota Vios 2013 has been generally untouched for a few years now and thankfully, the design has been changed in the 2013 version of the car.  Unveiled around March of this year in Thailand, the Toyota Vios 2013 now features a really aggressive styling, taking design elements from the bigger Corolla and Camry models.  The overall appeal is really nice, and on the side, it even resembles the Honda Accord.  The front grille now screams cool but it reminds me of the grille of the Ford Fiesta.  The tail lights resemble that of the bigger Corolla.   Anyway, here are the photos so you be the judge as to whether the Toyota Vios 2013 is cool or not.  I say it is way cooler than the previous models. 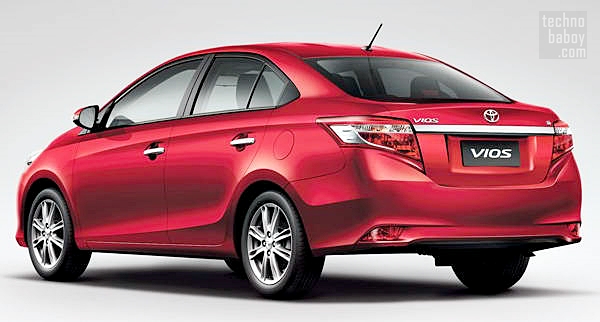 The new Toyota Vios 2013 is 4,410mm long, 1,700mm wide and 1,475mm tall and has a wheelbase of 2,550mm.  If it appears longer and taller than the previous model, it’s because it is.  The width and wheelbase of the previous Vios is however retained.  Apart from the  change in styling, however, the Vios is mainly the same since it still features a 1.5-liter 1NZ-FE DOHC 16-valve VVT-i gasoline engine with an choice of either a five-speed manual transmission or a four-speed automatic transmission.  There will be size variants of the Philippine version of the new Vios.

As to pricing, here are the details released by Toyota Motor Philippines:

If you want to see the Toyota Vios 2013 ahead of the July launch, you can do so by going to selected branches in Metro Manila and adjoining provinces as Toyota Motor Philippines has scheduled a preview of the sedan.  Here is the schedule of the preview.